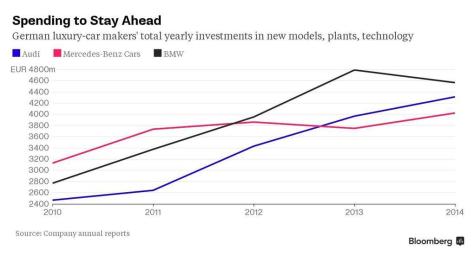 “The transportation industry is ripe for disruption. Either we kind of drive that disruption and gain from the new business models that will emerge, or we let someone else do it.”
BMW, Volkswagen AG’s Audi and Daimler AG’s Mercedes-Benz compete head-to-head on everything from new models to passenger comforts. But the threat of an Apple car has helped prod them to make a joint bid to acquire Nokia Oyj’s HERE digital map business, which may fetch as much as $4 billion, people familiar with the matter have said.

Do you really think not owning HERE is preventing the car industry from establishing digital payments with Starbucks? They’ve have about 15 years to get it going and have yet to see any kind of apps in cars, let along competing ones from the German 5. HERE is critical to their supply chain and legacy vehicles while Google Android and Apple move in with maps customers like. Meanwhile the car industry can work on adding value to them, such as the open W3C defined vehicle interface API and new UX creation that really streamlines smartphone integration.

Now for automated vehicles you will need good maps, and if HERE is the source, not Google, this would be a good deal. Let Apple scoop the coffee while making sure cars give people what they want, less crashes.